In my small amounts of spare time these past few lockdown-fueled months, I’ve been casually poking at a dumb idea. Like so many dumb ideas, it didn’t really amount to much itself, but it did spawn some other successively dumber ideas. And, well, those didn’t amount to much either. But! It sure was a fun, nostalgic and educational ride.. and I guess there’s a bit of entertaining trivia to be gained along the way. So in the next I-don’t-know-how-long-this’ll-be series of blogs, I’ll be diving into the world of tracker music, audio samples and ill-defined file formats, trying to rationalize why I ripped the sample metadata of all 130,000+ tracker songs I could get my hands upon in order to scratch a curious itch.

But in order to get to all that interesting stuff.. and, I guess, to rationalize why I even bothered.. we’ve got to start at the very beginning.. and that means winding the clock back twenty five years.

None of this would be possible without acknowledging the part that modarchive.com played in the digital preservation of an important piece of computing and artistic culture, that still flourishes to this day. Their torrents were pretty invaluable in allowing me to easily get my hands on the files we’ll be talking about in this and successive entries.

On a Sunday morning in 1995, my Dad returned from his morning church with a computer magazine in tow. Like many of the computer magazines at the time, attached to the front cover was a CD-ROM stuffed full of the latest DOS and Windows patches, shareware and WordPerfect clip-art. “Contains hours of CD-quality music!” it also boasted. It’s a dubious quote if ever there were one, sure, but it got me intrigued - and it was what ultimately became my first exposure to tracker music.

Loaded on the CD was a bundle of .MOD music files, as well as a player that would play them all. We’re talking a bunch of golden oldies like Guitar Slinger, Space Debris, and Popcorn. I actually still have that collection saved off and backed up on various forms, because it’s such a critical part of my childhood nostalgia.

As a kid who’d only been exposed to PC Speaker warbles and MIDI music from my Sound Blaster Pro, hearing these files was a revelation. It did sound like CD quality, in file-sizes that were barely even 100KB in size. What sorcery was this! Without any way to learn more about the files, I simply indulged in being a happy listener and let them be the soundtrack of my schooling life for the next four weeks.

The next month, my Dad came home again with the next issue of the same magazine, which sported another proud claim of more music on the CD-ROM’s contents.

There was some more .MOD files, but also, some odd .S3Ms as well. There was “Aquaphobia”, by some one/thing named “Purple Motion”. And “Catch That Goblin!” by.. “Skaven”? Who both had something to do with something called the “Future Crew”..? All these names and terms I had no idea about, but they sounded pretty awesome! And buried elsewhere on the CD was a zipfile named ST3.ZIP which - and if you’re down with your tracker history, you can probably guess - was the tracker authoring program ScreamTracker III.

This let you play, edit and create MOD and S3M files. With barely a README to nudge me along, I eventually managed to bumble my way through it enough to learn how tracker files were put together, and eventually wrote my first song. Then another. And another.

“Catch that Goblin!” by Skaven showed that tracker music could easily straddle genres, in the right hands

Without a library of sound samples to work with, I started most of my creations by exporting the samples from existing files, and then loading them into my own mods. For example, if one song had a particularly awesome bass-kick sound that I wanted to use? Well, just save that sucker to disk and then load it up in a new song. This was a pretty common practice with mod music, but the general rule of thumb with doing this was - much like writing a high-school essay - make sure to credit your sources.

Now, don’t get me wrong - I’m under no disillusionment here. My music was pretty bad! But damn did I ever feel proud. I still remember dragging my family into my bedroom so that I could unveil to them the bogglingly boisterous WSTLND2.S3M, which was my attempt at trying to do an atmospheric Pink Floyd-esque soundscape, and I utterly commend their politeness not to laugh during the ensuing minutes.

I didn’t know how to silence endlessly-looping samples, so I’d forcefully silence them by putting a snare drum hit in the same channel

How to blow your 100MB/month internet data quota

Fast-forward two years and I’m now attending university with my first dial-up connection to the Internet. Still mad-keen for tracker music, I stumbled the hornet.org demoscene repository pretty quick, and was suddenly overwhelmed with demoscene riches. Tracker music was my nightly study soundtrack, and one demoscene music group in particular received the majority of my dumb teenage worship: 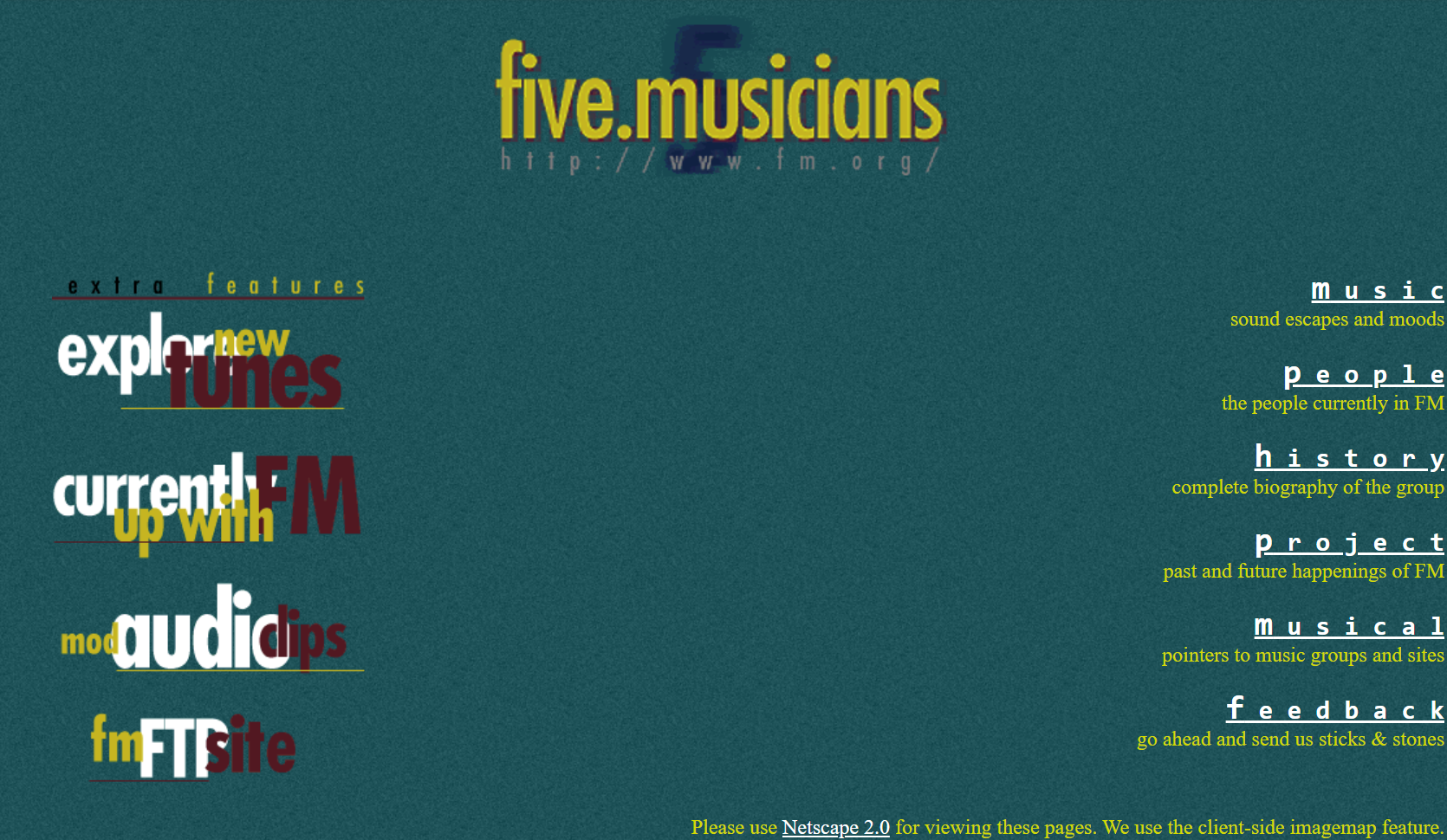 The “Five Musicians” website circa 1997 - please remember to use Netscape 2.0

Even to this day I still reckon it’s a pretty awesome conceit. Five Musicians was an occasionally-rotating roster of five tracker composers who were particularly skilled at writing music, and who released most of their output under that group’s moniker. One such artist was Necros, real name Andrew Sega.. and even if you don’t think you know Necros, if you were a PC gamer in the late 90s, you’ll be familiar with his work - one of his tracks, Isotoxin, appears memorably in the game Unreal, whilst Mechanism 8 was featured in the semi-sequel Unreal Tournament.

This song is still on my gym playlist

Necros has a catalog of tracker music so good, it’s hard to really single out just one specific stand-out track. But “Point of Departure” (featured above) from his music-disk “Progression”, really became an immediate favourite of mine. And it featured one of the most awesome drumloop samples I’d ever heard, aka BRBEATLP.958 (the sample’s filename in the S3M’s metadata):

BRBEATLP.958 in all its glory

As a terrible and lazy tracker, this drumloop was a blessing. Too lazy to write percussion by hand? Just slap that sample in there, baby, and call it a day! Now I’m sure every composer out there knows what I’m talking about here - it’s so easy to slap a drum loop in a song, but damn if you don’t feel lazy and half-arsed doing it. Unless of course you’re Squarepusher, and are twisting/turning the amen break five different ways from Sunday in every single track.

So, I churned out numerous songs using this sample. Prepare your ears for one such audio monstrosity:

I had a friend who visibly grimaced when I played this song to him for the first time, such is its power

Twenty five years later, I began to think. This sample was so good and so influential upon me at the time - was I alone in using it in so many of my own works? Was there a trove of other music out there using the same sample? Was “Point of Departure” even the first song to use it? And where the heck did this sample even come from in the first place?

Those questions are what I set about trying to find out. The answers, such as they are, will be found in coming entries.

I’m the one in Australia.
comments powered by Disqus